Henry Labouchère was a stuffy rich Victorian era politician with a love of roulette, journalist and theatre producer that created a system of betting called the Labouchere betting system. Some people say that it is complicated system. But when explained properly, it is quite easy to follow and we show below.

The Labouchere roulette betting system uses even the money bets on red/black, even/odd and high/low to make a predetermined amount of profit in every game session.

The major downfall of these systems are losing streaks and house betting limits. When you encounter a losing streak of three times, you have already lost a considerable amount that keeps getting exponentially bigger as you continue to lose. The system falls apart when you need to more more than the house limit.

An Easy Way To Win

When you win a lot of bets in a row, it seems like the system really works. Here is just one example of a quick winning session.

An Easy Way To Lose

PS: Check out the web story too!

French Roulette is a very simple game to play. There is a great mystique surrounding the game. But simply read below and let me show you how simple it is to play French roulette and win. Play and win French Roulette by knowing the advantages that this roulette version has over all other game varieties….

Your browser does not support the video tag. “Bond, James Bond”. That is what you reply when someone asks you what system you’re playing. It will not always win, but when it does “it impresses”. The James Bond roulette betting system is really quite easy to play because it consists of only three bets. Overall,…

A fret is a separator. On a roulette wheel the little tab that separates the numbers is called a fret. If you find a live roulette table with a loose or worn fret you should be able to figure out which numbers it will favor. This is one of those so called “wheel biases”…

In the Hamburg Variant of European Roulette, players get back one half of their even money bets when the ball lands on zero. This reduces the house edge to 1.35% for even money bets, the same as in French Roulette. This is advantageous in any betting strategy using even money bets such as the James…

The classic game of French Roulette has 4 special bets that use an additional special betting table not available in other  roulette game versions like European or American roulette. But in some online casino software, developers like NetEnt add a lot more ways for French Roulette players to make these strategy bets fast and easy…. 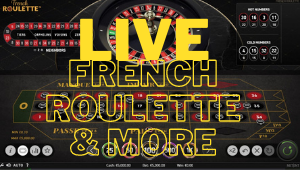 LIVE & COMPUTER BASED – Play for REAL & for FREE